When I began my Disney Program, I had hopes and dreams of blogging weekly and taking hundreds of pictures and creating this live journal of my experience. In typical “me” fashion, that soon became a handful of half-started posts which then dwindled to radio silence well into the months after I returned home. *insert shruggie guy here* I’m trying to be better, friends. I promise. One of the half written posts was about my first night at Magic Kingdom since gaining entry to the parks. As some may know, I did have the chance to go on a Disney family vacation when I was 10, and while I was old enough then to remember a lot of the trip, seeing it all through adult eyes was brand new. I seriously felt like a kid again, guys. I debated over whether or not to write this as a current and reflective post, but I think we’ll take a trip back in time (about 11 months ago) and try to finish writing this one from my brand new eyes. Give me a moment here to get my head right….*cotton candy, It’s A Small World, giant balloons* Okay, you ready? Great! I present to you: Effie’s First Wishes…

As of two days ago, I am officially, 100% authentically, no doubts about it, a Disney Cast Member and employee! My love for Disney began at a young age with The Lion King and Beauty and the Beast and The Little Mermaid and has not wavered as I have grown up. Movies like Monsters University, Big Hero 6, and Finding Nemo continue to touch my heart and fill me with that wonder that you can’t quite explain with words- but it’s magical. The idea that I actually am now a paid employee of the 11th largest company in the world, that my name will forever be in their books, that I am part of Disney history, that I have the power to make the magic real for someone else- all of that has not quite sunk in yet. When I was young, of course I wanted to be a princess, in the “fancy dresses and Prince Charming” kind of way, but actually working for Disney never once crossed my mind. Now I know it’s an opportunity I would have never passed up.
What I appreciate about this company is that they embrace the child-like wonder and they bring it to life again for parents and Cast Members alike. I have not stood backstage and felt disappointed to know certain things were not real after all this time, but rather excited to know the secrets that keep the magic alive. After training yesterday, I went to the Magic Kingdom with my new roommate Katie. We walked around and even rode a couple rides,but I was there for the fireworks. Now Katie has an annual pass, which means she has been to Disney many times over the years, but I had not been in any of the parks for 12 years and when we were here then, we somehow managed to miss all of the night time entertainment. I was beyond excited to have this experience, and I would be flat out lying if I told you I did not have a downright magical night.
Let me start from the beginning of the night: Katie and I, newly employed, decided to use our company issued Blue ID cards to get into the park since our Main Gate would take a couple weeks to arrive. Having no idea how to get into the parks, we just rode the employee bus straight up to the Utillidoor. *hint hint* This was the wrong way to get in the parks. We learned later that using the Utillidoor while not on the clock is a pretty fast way to get in trouble, but we were new and we didn’t know what we were doing. After asking a couple of Cast Members and walking in some definitely off-limits areas, we arrived at one of the Cast Member entrances to get on-stage. Peering around the corner, we saw a family sitting nearby and the entrance to the public bathrooms. We were obviously dressed in plain-clothes, so just jumping out from behind the wall was going to seem very suspicious. We decided to make a run for it, and get as far away from the area as fast as possible in case any security personnel were nearby. Walking fast, we made a bee-line for the carousel and didn’t look back, though I’m certain there were many pairs of eyes staring at our backs as we hurried past.
It was settling into early evening (and it was still February, meaning it wasn’t too busy in the park) so we had enough time to ride a couple things and walk around to find dinner and a good view for the fireworks. We rode the Journey of the Little Mermaid, took a quick trip through history on the Carousel of Progress, and even managed to snag a seat on Pirates of the Caribbean. We decided on Casey’s Corner for dinner (mini corndogs and french fries) and found a spot to stand to see Wishes. Before Wishes was the laser light show called Celebrate the Magic (now retired; RIP), and we didn’t catch the whole thing the first time around, but saw it the second time it played later(pretty certain this is my favorite part of the night time entertainment). When Wishes finally started, I was practically jumping out of my skin. My first Disney fireworks show, and I was ready! The show incorporated music and visuals and, of course, fireworks timed perfectly to the sounds. It even featured a surprise appearance from Tinkerbell! As I watched the families around me enjoy the display, I couldn’t help but feel warm and fuzzy myself. This place is my new home, and I get to come and enjoy it whenever I want. After watching the show and walking through the massive gift shop on Main Street, we made our journey home- again, we were kind of clueless here, but we figured it out eventually.
I can’t wait to experience the fireworks and Magic Kingdom again and again. I can’t wait to see the faces of the people around me experience the magic that I have already felt, I can’t wait to create that magic for them! My real training in the parking lot begins soon(not too sure I’m excited about that, but we’ll see!) and I cannot wait to see where this journey takes me. Here’s to Disney, and many adventures to come! 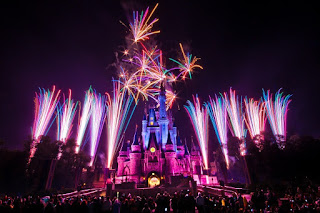 Now, I won’t lie to you. When I first saw Wishes, I kind of thought it was silly. The music, especially. I loved the fireworks, but it took several more viewings for me to come to really appreciate the whole show. It eventually became one of the sole reasons for me to go to Magic Kingdom, and on my last night in the park, I sat on the Hub lawn and cried while singing along. For whatever reason, Wishes seemed to perfectly encapsulate what it meant to be filled with wonder and what it meant to be at Disney World. It never failed to bring me back to the reality that I was really there, as an actual Cast Member for this amazing company. Shout out to Katie for taking me that first night, and shout out to Walt for making the magic last well into my adulthood.
Post Views: 92